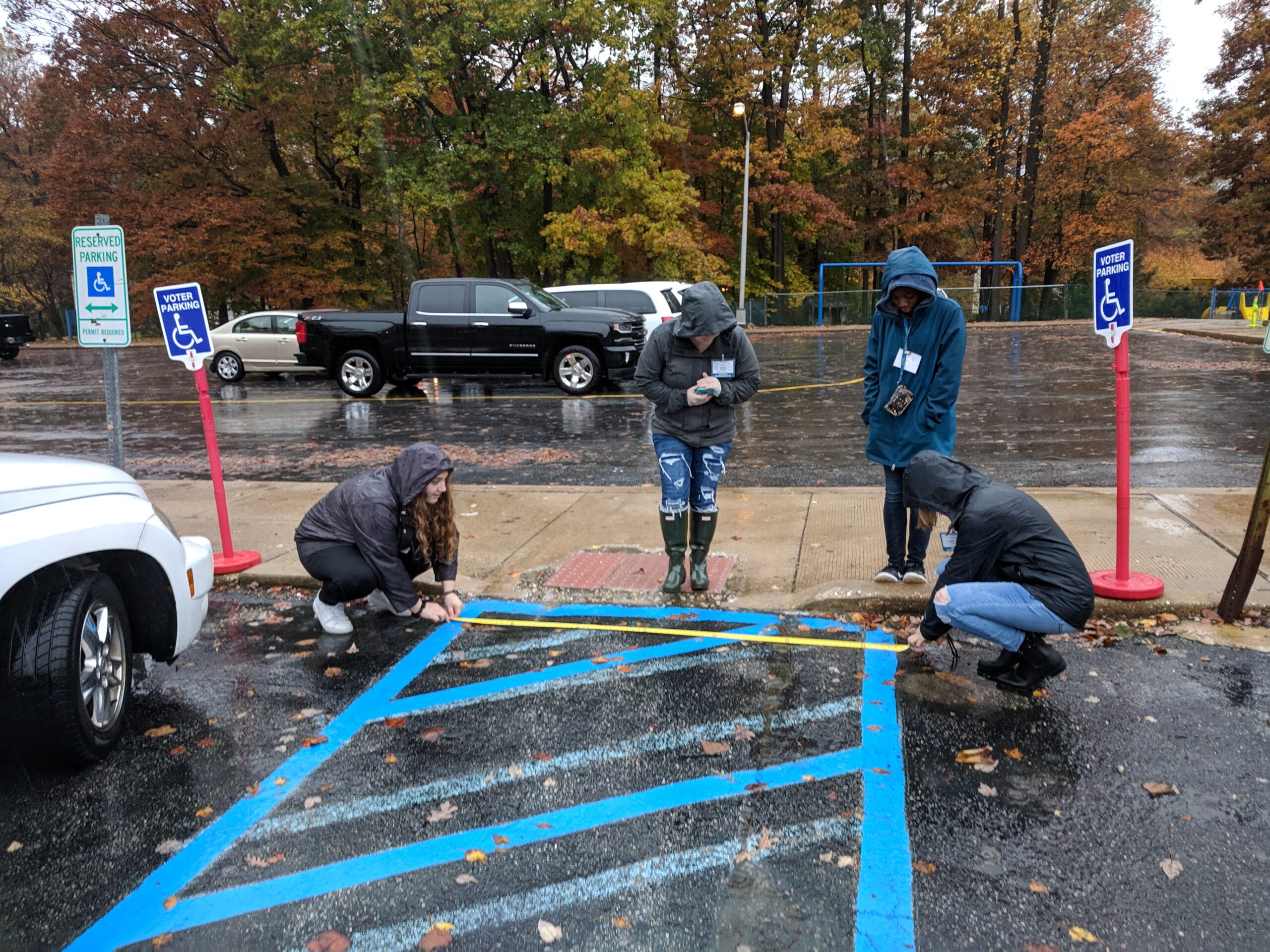 The Disabilities Law Program (“DLP”) of the Community Legal Aid Society, Inc. (“CLASI”) will be monitoring selected polling places statewide for accessibility for people with disabilities during Delaware’s General Election on Tuesday, November 8, 2022. CLASI staff will be joined by student volunteers from the University of Delaware’s Access:Ability Scholars program and Widener University Delaware Law School.

They will be monitoring polling sites in all three counties for barriers for people with disabilities, including lack of accessible parking and entrance routes from parking areas, problems with ramps, doorways that are too narrow, and locked doors at accessible entrances. All findings will be reported to the Delaware Department of Elections.

“Many people are surprised to learn that 30 years after the passage of the Americans with Disabilities Act, physical access to polling sites remains a persistent problem here in Delaware,” said Laura J. Waterland, Esq., Project Director of the DLP. “We also hear from voters who are misinformed about their right to have someone help them in the voting booth or are discouraged from using the special technology available to help them vote independently.”

Monitoring polling places for accessibility is more important than ever this November, in the wake of the Delaware Supreme Court’s ruling last month that struck down vote by mail and same-day registration. CLASI and other voting rights advocates had hoped these provisions would improve voting access for people with disabilities.

“One in four adults in Delaware identifies as having a disability, representing a large portion of the electorate, but studies show there’s a significant ‘disability gap’ where people with disabilities vote at lower rates and are twice as likely to face voting barriers,” said Joann Kingsley, PAVA Voting Rights Advocate with the DLP. “Now that vote by mail is no longer an option, it’s critical to ensure that people with disabilities can access their polling places and we’re thrilled to have a great group of UD and Delaware Law students to help us to monitor as many sites as possible on Election Day.”

The University of Delaware student volunteers are enrolled in the Access:Ability Scholars course of study and the Disabilities Studies minor, academic programs that are open to students with or without disabilities who have a personal or professional interest in disability. “The Scholars program in particular encourages and supports students to engage with issues of access and inclusion on campus and in the community,” said Dr. Laura T. Eisenman, a professor at UD’s School of Education who coordinates both programs. “In class we talk about disability rights and the importance of putting ‘nothing about us without us’ into action. Making sure that disabled voters have access to the polls is one very concrete way to help make this happen.”

The Delaware Law School student volunteers are members of the school’s American Constitution Society (“ACS”) chapter, which works to uphold the Constitution by ensuring that the law is a force for protecting democracy and the public interest. “The inspiration for participating in this project came from taking a Disability Law course at Delaware Law School,” said Ted Carroll, a third-year law student and president of the ACS chapter. “I’m so excited and humbled to be able to further the mission of Delaware Law School and the American Constitution Society by participating in this endeavor with my fellow classmates and ACS members, especially at a time when ensuring and protecting the foundations of democracy have never been so vital.”

Individuals with disabilities who encounter problems with access at their polling places on Election Day should bring these barriers to the attention of poll workers, their county Board of Elections, and Joann Kingsley, Protection and Advocacy for Voter Access (“PAVA”) Voting Rights Advocate with the DLP, who can be reached at 302-856-2027 or jkingsley@declasi.org.

Voters should be aware of their right to take a person of their choice into the voting booth if they require assistance in voting. They may also ask for assistance from official poll workers. People with cognitive impairments may vote, even if they have a guardian, under most circumstances. Voters with low vision or other impairments can enlarge the font and change the contrast of the screen on the voting machine. Any voters who prefer listening to their ballot may also utilize the Universal Access Console (“UAC”) connected to the voting machine, whose buttons are in Braille and which allows voters to use headphones to listen to rather than read the ballot. Other accessible features are also available.

While presenting identification is preferred when voting and will expedite the voting process, a voter without identification who is listed in the poll book may sign an affidavit affirming their identity. Delaware does not require photographic, or any other identification, for most registered voters. If you are a first-time voter who registered by mail, you will require identification. Whether voters bring identification or not, it may be helpful to bring mail, such as utility, tax, rent, or mortgage statements showing their name and address.

If a person feels intimidated or interfered with in their ability to vote, they should immediately reach out to the polling site supervisor for assistance. It is illegal under Delaware law for a person to “by force, threat, menace or intimidation, prevent or hinder, any person…qualified to vote from voting according to said person’s choice at any such general, special or municipal election.”

The only individuals allowed to challenge a person’s credentials to vote are the two official party challengers located inside each polling location. It is worth noting that these challengers do not decide whether a person is eligible to vote; rather, a vote is taken of the two judges and the inspector. Individual voters who are found not to be eligible after a challenge are to be offered a provisional ballot.

The Office of the Delaware Election Commissioner has a voter portal, https://ivote.de.gov/. At this site, a voter can check the status of registration and confirm assigned polling place locations. On Election Day, poll workers will make every effort to identify the correct polling place for voters who may have gone to the wrong polling place. However, voters should also be aware of their right to cast a provisional ballot in federal elections, should the polling place refuse to allow them to vote. There is also a procedure available to petition in Superior Court under certain circumstances. Identification is required for provisional voting. Voters may also file complaints with the Delaware Election Commissioner.

Founded in 1946, the Community Legal Aid Society, Inc. (“CLASI”) is the oldest and largest provider of free civil legal services in Delaware. Its mission is to combat injustice through creative and persistent civil legal advocacy on behalf of vulnerable and underserved Delawareans, including people with disabilities, seniors, victims of domestic violence, and people living in poverty.

The Disabilities Law Program is a special program of CLASI and is designated by the Governor as the state’s Protection and Advocacy agency, charged with providing advocacy services to Delaware residents with physical or mental disabilities through its offices in Wilmington, Dover, and Georgetown. The Protection and Advocacy for Voter Access (“PAVA”) project within the DLP works to ensure full and effective participation in the electoral process for individuals with disabilities.

For more information about the Disabilities Law Program at CLASI, visit: http://www.declasi.org/disabilities-law-program/