The Delaware State Senate presented a tribute to a long-time advocate for people with disabilities in Delaware. Brian Hartman, Project Director of the Disabilities Law Program (DLP) at Community Legal Aid Society, Inc. (CLASI) was honored by the Senate for his 40-year career advocating for and representing individuals with disabilities. Hartman is retiring from CLASI later this year.

The Tribute, presented by Senators Nicole Poore and Bryan Townsend, recognized Hartman for “his distinguished career of tireless efforts to decrease stigma and as a dedicated advocate for individuals with disabilities. He has been a prominent voice for clients and for change in the system, often times so difficult to navigate for those most vulnerable.”

During his career with the DLP, Hartman became one of the state’s most respected experts on services for people with disabilities. He has thoroughly analyzed, commented on, and even drafted alternate language on almost every regulation or law passed in the last 35 years that affects the lives of this population. Hartman led efforts to improve accessibility and safety for people with disabilities, increase community-based living opportunities, expand the quality of and access to education, and advance many more aspects of the lives of individuals with disabilities in Delaware.

The Tribute noted, “Brian has known many accomplishments and surpassed several milestones. He has attained the respect and high regard of his colleagues, staff and clients and most especially, all those with whom he has come to know in Legislative Hall. Truly a gentleman I the finest sense of the term, his time, genuine commitment and professionalism have been so very much appreciated. The sponsors find it most befitting, the Senate pay tribute to an exemplary citizen of the First State and his quietly rendered expertise, so freely shared.”

CLASI Executive Director Dan Atkins said, “Any piece of Delaware legislation impacting people with disabilities over the last 35 years likely has Brian’s fingerprints all over it. As the Director of CLASI’s DLP for over twenty years Brian improved the lives of thousands of people with disabilities in multiple spheres of life and across the life course. From early intervention to special education to employment to housing to civil rights Brian was the go to expert who we all relied upon for careful, sophisticated advice.”

Members of the disability community will miss Hartman and his work. Pat Maichle, director of the Delaware Developmental Disabilities Council said, “It has been an honor to work beside Brian Hartman.  He has served the disability community with integrity, unending commitment, honesty, and sincerity for over 40 years.  He is held in high regard by his clients, his peers, Delaware State employees, Policymakers, Legislators, the Governors of Delaware, and our Congressional representatives.

Bobby Kennedy once wrote, ‘Moral courage is a rarer commodity than bravery in battle or great intelligence.’  Brian has always possessed, acted with, and maintained moral courage for the most vulnerable people in Delaware of all ages.  He also possess great intelligence and patience which he often uses to bring sense to each discussion no matter how heated or controversial.

Brian will be missed by all who worked with him, but most assuredly, by those who he represented, his clients, people with all disabilities and their families who depended on him to save them.  We wish him well and we hope that he finds happiness and health in his well-earned retirement.” 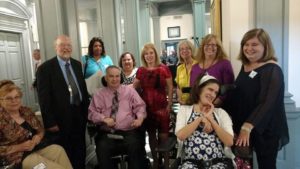 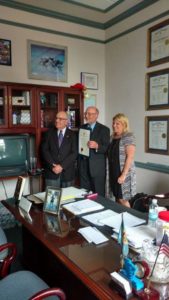 Brian with Representatives Viola and Longhurst 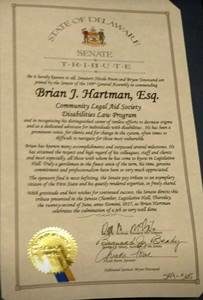 The Senate Tribute to Brian 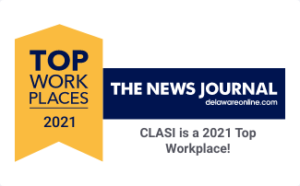 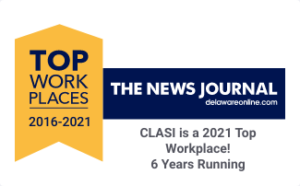