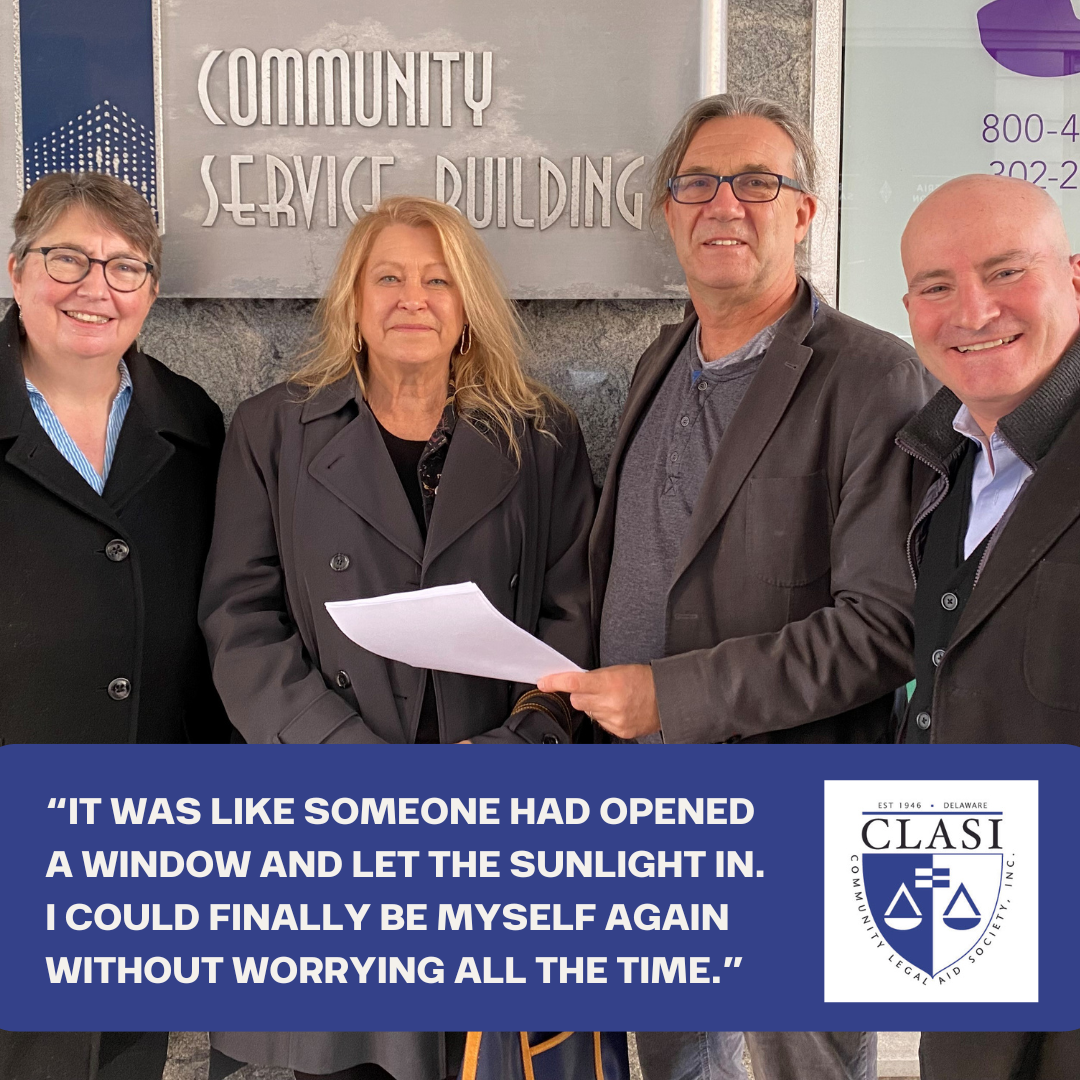 This holiday season, Marilynn R. finally received something she has wanted for over 15 years: justice.

Her Social Security disability case shows how broken systems do immense harm to vulnerable people in our community. It also shows how our clients’ courage and perseverance, coupled with the skill and dedication of our advocates, can ultimately achieve just results.

Marilynn first sought help from Community Legal Aid Society, Inc. (CLASI) in 2007. She’d had a successful career in Wilmington until she developed multiple chronic illnesses in the late 1990s, which became so debilitating she had difficulty even getting out of bed. “I was in so much pain I could barely move, and I was forced to stop working,” she recalls.

Overwhelmed and struggling financially, Marilynn turned to CLASI for help. She first met with Chris Winslow, a senior paralegal with our Disabilities Law Program (DLP). “Chris and I hit it off from the beginning, she put me at ease right away,” says Marilynn. “Everybody I’ve worked with at CLASI has been absolutely wonderful. They all believed in me and supported me.”

What Marilynn and Chris did not know back in 2007 was that it would take 15 years and five different CLASI advocates and attorneys working tirelessly to restore her disability benefits. They faced a series of hurdles due to the complex nature of her conditions, along with multiple administrative roadblocks.

The case ultimately required tracking down thousands of pages of medical records dating back decades, four separate Administrative Law Judge hearings, and an appeal to the U.S. District Court. Chris was on the case every step of the way, assisted over the years by pro bono attorney Ryan Ford, current executive director Dan Atkins when he was an attorney with the DLP, former supervising attorney Jenny Kye, and advocacy director John Whitelaw.

During the course of her appeals, Marilynn was diagnosed with cancer and had to move in with her elderly mother. She also faced bouts of severe depression due to her pain and the stress of her Social Security case. “Each time I was denied, it was so hard on my mental health. It was tempting to give up, but I felt that I had to keep going,” she says. “It was no longer about the money. It was about justice, and someone recognizing what I’d been through. Somewhere along the line, someone has to listen to people in need.”

After many delays and setbacks due to the pandemic, the case was finally heard by an Administrative Law Judge for a fourth hearing in October 2022. Based on CLASI’s arguments, the judge issued a decision finding that Marilynn had in fact been disabled since 2001 due to her severe conditions. Under Social Security’s rules, she is now entitled to 16 years of retroactive disability benefits.

“When I got the decision, I just started crying because it had been weighing on me for all of these years,” Marilynn says. “It was like someone had opened a window and let the sunlight in. I could finally be myself again without worrying all the time.”

Now 71 years old, Marilynn says the benefits will be extremely helpful in making ends meet, as her family has been struggling more than ever due to the pandemic. But even more important for her is knowing that justice has prevailed.

Reflecting on her experience, she wants people to know how important legal aid can be in people’s lives. “I absolutely could not have done this without legal aid’s help,” she says. “In this country the legal system really doesn’t work for you if you can’t afford a lawyer. I lucked out because I found good legal help at CLASI, but it should be the same for everyone who needs help.”