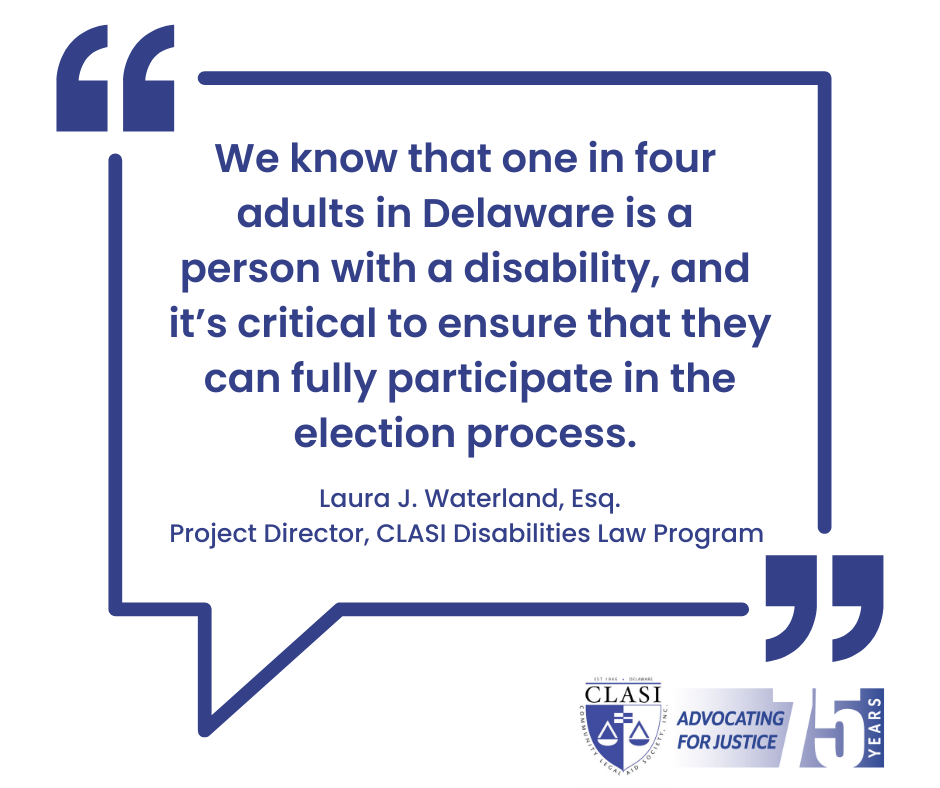 “We know that one in four adults in Delaware is a person with a disability, and it’s critical to ensure that they can fully participate in the election process, including accessing polling places so they can vote independently and privately,” said Laura J. Waterland, Esq., Project Director of the DLP. “Unfortunately, they often face barriers to voting and as a result vote at lower rates than people without disabilities. We’re trying to change that.”

The DLP is a special program of CLASI and is designated by the Governor as the state’s Protection and Advocacy agency, charged with providing advocacy services to Delaware residents with physical or mental disabilities through its offices in Wilmington, Dover, and Georgetown. The Protection and Advocacy for Voter Access (“PAVA”) project within the DLP works to ensure full and effective participation in the electoral process for individuals with disabilities.

“As one of the largest voting blocs in Delaware, it’s so important that people with disabilities can make their voices heard. That’s why we’re monitoring polling sites across the state for common barriers like lack of accessible parking and entrance routes from the parking lot, problems with ramps, and locked doors at accessible entrances,” said Joann Kingsley, PAVA Voting Rights Advocate with the DLP. “We also see voters being misinformed about their right to have someone help them in the voting booth or being discouraged from using the special technology available to help them vote independently.”

Individuals with disabilities who encounter problems with access at their polling places should bring these barriers to the attention of poll workers, their county Board of Elections, and Joann Kingsley, PAVA Voting Rights Advocate with the DLP, who can be reached at 302-856-2027 or jkingsley@declasi.org.

Voters should be aware of their right to take a person of their choice into the voting booth if they require assistance in voting. They may also ask for assistance from official poll workers. People with cognitive impairments may vote, even if they have a guardian, under most circumstances. Voters with low vision or other impairments can utilize the Universal Access Console (“UAC”) on voting machines, which allows voters to listen to rather than read the ballot, or to use Braille, change the contrast of the screen, or change the font size.

New this year in Delaware is the ability to register to vote up to and on Election Day itself. If voters want to do so, they must have identification showing their current address: a state-issued photo ID, current utility bill, paycheck, or any government document with the voter’s name and address.

While presenting identification is preferred when voting and will expedite the voting process, a voter without identification who is listed in the poll book may sign an affidavit affirming their identity. Delaware does not require photographic, or any other identification, for most registered voters. If you are a first-time voter who registered by mail, you may require identification. Whether voters bring identification or not, it may be helpful to bring mail, such as utility, tax, rent, or mortgage statements showing their name and address.

If a person feels intimidated or interfered with in their ability to vote, they should immediately reach out to the polling site supervisor for assistance. It is illegal under Delaware law for a person to “by force, threat, menace or intimidation, prevent or hinder, any person…qualified to vote from voting according to said person’s choice at any such general, special or municipal election.”

The only individuals allowed to challenge a person’s credentials are the two official party challengers located inside each polling location. It is worth noting that these challengers do not decide whether a person is eligible to vote; rather, a vote is taken of the two judges and the inspector. Individual voters who are found not to be eligible after a challenge are to be offered a provisional ballot.

The Office of the Delaware Election Commissioner has a voter portal, https://ivote.de.gov/. At this site, a voter can check the status of registration and confirm assigned polling place locations. On Primary Election Day, poll workers will make every effort to identify the correct polling place for voters who may have gone to the wrong polling place. However, voters should also be aware of their right to cast a provisional ballot in federal elections, should the polling place refuse to allow them to vote. Identification is required for provisional voting. Voters may also file complaints with the Delaware Election Commissioner.